Zlín is a shiny phenomenon

Le Corbusier’s sentence “Zlín is a shiny phenomenon” is the motto and the fundamental characteristics of an exhibition project that introduces the architecture of the company Baťa. The famous architect wanted to participate directly in the construction of Zlín, but his designs were not implemented. Today, however, they constitute an attractive part of the exhibition “The Baťa Phenomenon – Zlín’s Architecture 1910 – 1960”, which takes place in Veletržní Palác (Trade Fair Palace) in Prague.

The exhibition points at the importance of Baťa, the representativeness and grandeur of the construction activities and the above-average standard of living in Zlín before the end of 1930s. It introduces Zlín as the peak of First-Republic functionalism and the only consistently developed functionalistic city in Europe. The enormous interwar construction activities of Tomáš Baťa, who hired renowned architects, changed a town of three thousand inhabitants into an agglomeration with 43,500 residents and with unique architecture.

From Zlín to the world

Zlín developed at a rate unseen in any other city in our country. Between the wars, a unique city with a unified style was growing here, with its own lifestyle. The architecture of all industrial and public facilities was based on the structural module of corporate factory buildings, sized 6.15×6.15 metres. The city was growing from this “corporate” module, on the basis of a principle of unification and standardization. A shell of reinforced concrete with columns was a typical feature for all buildings in Zlín at that time, and the individual buildings differed by their beam fillings and window openings. Everything was built economically, yet impressively, on a unified principle. The construction of Zlín was managed similarly to corporate production – everything went on very smoothly.

In many aspects, the company’s activities influenced not just the Zlín region, but the whole “world”. Its character and specific features were reflected in the expansion of corporate construction outside Zlín, in the whole country and abroad. The first signs included the deployment of a sales network and the company’s own department stores, followed by the construction of complete satellite factories and towns. Baťa stores and factories as well as housing estates scattered throughout the world are an example of an elaborated system of unification and standardization. Their character clearly referred, and often still refers to the original inspiration in Zlín.

The exhibition also points at the highly esteemed buildings of the interwar functionalistic architecture, such as Tomáš Baťa’s Monument and the Masaryk School building by the architect František Lýdie Gahura, social club houses in Zlín and Otrokovice and the 21st administration building designed by the architect Vladimír Karfík. 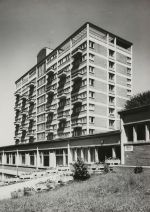 Baťa – not only a producer

The exhibition, which primarily focuses on architecture, introduces the Baťa phenomenon in a broader context of cultural history. Zlín’s architecture created a healthy, cultural environment. The multiple variations in Zlín from the beginning of 1930s included an expansion of activities that soon complemented the original cultural line of Zlín’s traditional town society. In addition to the huge expansion of production operations, sales and other related industries, the city saw the gradual emergence of non-production activities, which turned into excellent cultural and educational institutions.

For the individual industries, Baťa managed to persuade and bring major personalities from the whole country, who contributed to the profiling of the modern, cultural atmosphere of Baťa’s Zlín. This climate and the stimulating environment attracted more and more talented people to Zlín, especially as multiple forms of support were channelled to education. This system of education, unique in the whole country, stemmed from the idea to train and shape the company’s own employees and create optimum conditions for their education and self-improvement. 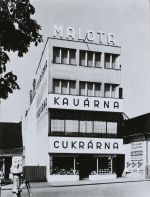